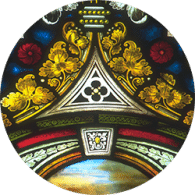 One long reverberating blast of the shofar, the trumpet of God, echoed in waves from the summit of Mt. Sinai — penetrating rocks and trees; shaking the wilderness with awesome majesty. One man alone understood. At the sound of that trumpet voice, a solitary man stepped trembling from the crowd. Moses, the meekest of all men, slowly began his ascent to the heights of Mt. Sinai.

This mount, now quaking as in fear at the presence of God, was not unfamiliar to Moses. He had been there before. The trumpeting voice that signaled him to “come up” was the voice of the God he knew. Moses was prepared for the glory he would soon experience. He would be able to stand when God appeared to him, for he had been given “Glimpses of Glory.”

Once, months before, Moses stood at the foot of Mt. Sinai in rapt attention. Amid the unbroken monotony of the wilderness stood an extraordinary bush. In the deafening silence, came an arresting voice. It was the voice of majesty that called, “Moses! Moses!” It was a bush aflame that caught his attention.

As in the time God trumpeted from the heights of Sinai (Zechariah 9:14), the Lord Almighty, with great deliberation will once again lift the shofar to His lips. With one mighty blast, the breath of God will soon announce: “Open the gates! The King is coming, the King of glory, mighty in battle; the Victorious Lord strong and mighty in battle.” (Psalm 24:8).

If you are desiring to know Him in this dimension, open your heart and He will come in with His splendor, strength, and power. In preparation for this–WATCH!

As with Moses, you are about to receive awesome, majestic, arresting,

Glimpses of glory burst into view —

Surprising, delightful visions of You.

Where may we find You?  Where do You dwell?

“I live with the humble; the contrite as well.

I’ll show you My glory as you walk My way —

In lowly submission, do all that I say.

If you put your knowledge and pride on the shelf,

Take up My cross and crucify self,

Glimpses of glory will be your reward —

Thank you, Father. This holy ascent and knowledge of You is what Your remnant people desire. Please prepare each for this great calling. Amen.